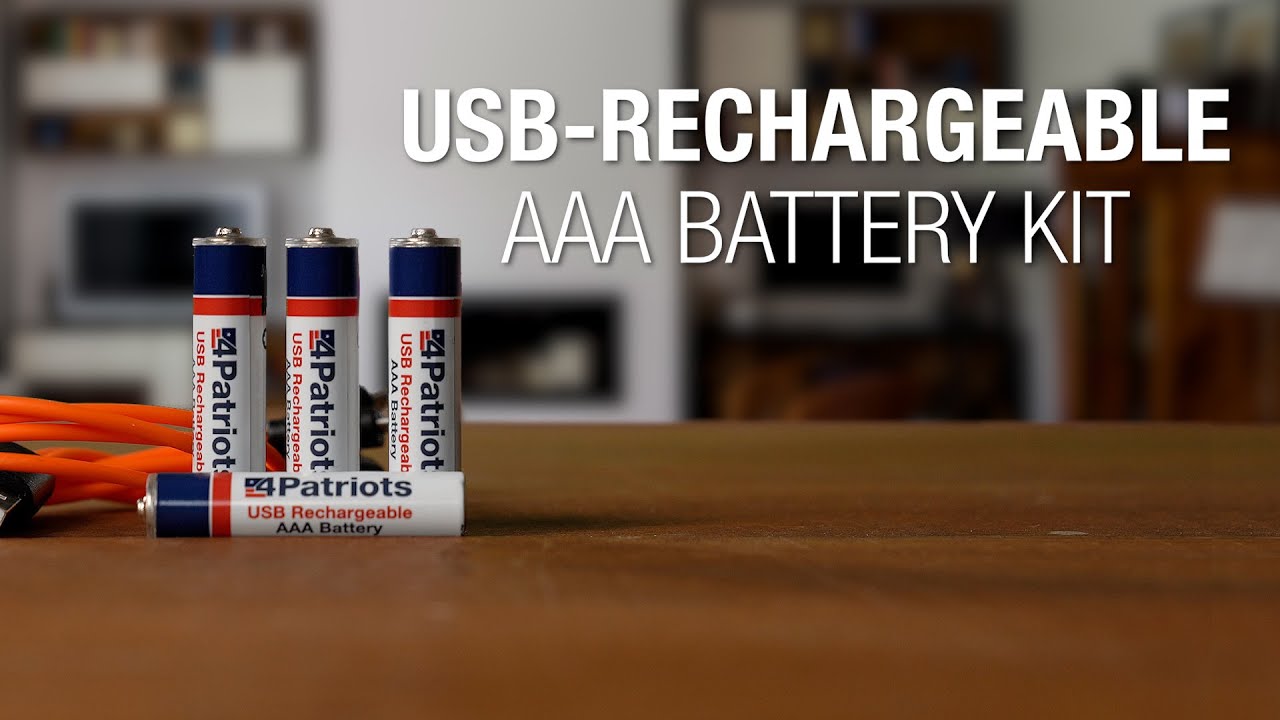 33 reviews
Save with coupon

Never Buy Traditional AAA Batteries Again! Always have power on hand for your critical devices with your 4Patriots USB-Rechargeable AAA Battery Kits. These rechargeable batteries work anywhere you’d use “regular” AAA Batteries. And they pay for themselves hundreds of times over. Thank you for submitting a review!

Your input is very much appreciated. Share it with your friends so they can enjoy it too!

I'm very happy with my purchase. This is saving me a lot of money, and these do stay charged a sufficient amount of time to warrant the purchase.

Karen, thank you for your review. We're so glad to hear that you're happy with your purchase of the USB Rechargeable AAA Battery Kit. Thank you for supporting 4Patriots! Best Regards ~ Brigitte

Must have for everyday or emergency use

Good product to have on hand as well as a money saver.

Thank you for your review Michael! It is great that you are satisfied with the USB-Rechargeable AAA Battery Kit. Best Regards ~Ashley

i have only tested them

they work as advertised, the ability to charge them over and over again, will save a ton on regular batteries, and in a pinch.

Hi Tim, Thank you for your review and feedback of our USB-Rechargeable AAA Batteries. We love hearing we're meeting your expectations! Best Regards, Kristy B.

So far, so good

These batteries arrived quickly in their own little case which is great for storage. They can be easily charge with the Solar charger that I purchased from 4 Patriots or even my computer terminal with the USB charge cords. It was easy to charge them, and I immediately started using them. So far, they work great, and this is a wonderful item. A great stocking stuffer for anyone with kids that are constantly looking for batteries for their toys, or electronics. Combine it with the Solar battery pack and save money on your electric as well. You and your family will always have batteries available for use.

Thank you for your review Christine! It is wonderful that you are happy with the USB-Rechargeable AAA Battery Kit. I am glad that they work so well for you. Best Regards ~Ashley

i enjoy the chargeable very very much.

Thank you for your review Sherrie! It is great that you enjoy the USB-Rechargeable AAA Battery Kit. Best Regards ~Ashley

Ordered before and very happy with performance of the rechargeable batteries which also saved me money over normal batteries.

Bob, thank you for your review. We're so pleased to hear that the USB Rechargeable Batteries have met your expectations. Thank you for supporting 4Patriots! Best Regards ~ Brigitte

Hi Michael, Thank you for your review and feedback of our USB-Rechargeable AAA Batteries. Have a fantastic day! Best Regards, Kristy B.

They are a second set of 16. A 6 screen system to blow up lettering in a word processor demanded more batteries because the battery boxes of tiny cameras got broken and I resorted to the old fashioned big cameras of the past. The camera battery box will take the pounding, wear and tear of ten million openings and (shuttings) a day. A 6 screen system does not require taking pictures with tiny print and going to the store to replace a camera. It was now so expensive the old fashioned style camera was purchased and finding it had connection capabilities with the TV (direct) not having to “via” a computer. Friendliness skyrocketed. I already (by now) had 16 more AAAs ordered and when arrived, did a revolution of their own. From study my system was simplified back to 1990. Book, dictionary, pen and paper. The batteries made the complicated wires on my bed cease (to be complicated) and nothing else was left that was cluttering up the bed. Computers, remotes, all learned about and no longer in the way. Because I learned how to blow up lettering and digitize it in 3 rounds of camera shooting. Versus 12 (if you only have one TV screen. (I use 6, 2-32 inch Roku(s) glued together and on their sides to have a 64 inch TV (effect). 1-32 inch Roku, normal, but used rectangularly in word-processing mode to get more lettering digitized. 2-Emerson 19 inch TVs and the last is just a $100 “Lenovo” computer (10 inch screen). 3 rounds of shooting with a camera versus 12. When the batteries first arrived I tried using “gun” magnet power to keep track of them (I bought 6 gun magnets from “4 Patriots”) Too complex. So, I just took a box shaped to hold a CD player, used a razor blade and made Xs (as cuts) on front and back and inserted batteries as (they’re like arrows for a bow and arrow for me) Arrows. I can stay focused, stay concentrating on study and if a battery dies, I charge it through USB. (you don’t have to go to the camper and plug in a 120 volt charger, jiggle the battery until the charging light goes on, then return and retrieve the charged battery. The USB style lets you charge right then and there. An extension cord hooked up to a USB tower, hooked up to the wires that come with this, lets you stay where you are. Not lose concentration on studying and put a new battery in and go on uninterrupted. In my old small apartment it was annoying to get up and walk across the room to even just check the charging status. So, these batteries arrived and disentangled my remotes (about 6). Where I felt before I didn’t have enough batteries for a day's journey into study. I certainly did now. Big problem? Needing lots of time and focusing power physically and spiritually. No problem. It’s like you can arrive. Whereas before, in the learning stage. There was too much button pushing, too much battery power administration. Like a TV commercial going like a broken record. Interrupting, interrupting. Mainly because my newest camera requires AAs and I never used them much since computers. Mice, keyboards, and tiny digital cameras usually use “AAA”(s). Since both got put into action. I combined old feelings for the AAs with the new needed use of AAAs and felt simplified. Organized. Like working with the old study tools of the past. Only USB oriented batteries are new and very helpful. If you ever put all your energy into getting a burger, sitting down in front of the TV and studying. And was then interrupted by the old style battery compartment way of charging batteries. It’s tedious and unnecessary now USBs are available. You can charge individually drained batteries. Whereas most old style chargers you have to charge in pairs. What a defeating energy source. I’ve also used solar power on flashlight power to photograph pictures. In which I take at least 60 a day. The battery compartments for those, the doors of those batteries break and even get lost, because the doors of those are so small and easy to bust. So, returning to the old style “huge” cameras ($130 for one versus $230) The battery compartment doesn’t bust, won’t let me down. It was when my new (old style) camera was found to eliminate going to the computer to reread what I just photographed. That I found AA batteries useful, like the 70s. I knew I was now going to use the system like it was going out of style. These new style batteries give the old style battery feeling of having you have back up when needed. In the 70s, it was a bike generator that needed no batteries. The computer age, with relation to study, has 6 TV screens, more batteries and a knowledge and skill of how to file notes and make labels of files in 400 and 200 size font. Cutting out excessive button pushing to reread study notes.

Thank you for your review, David! We're so happy to hear that the USB-Rechargeable AAA Batteries are working so well for you. Best Regards! ~ Kerri